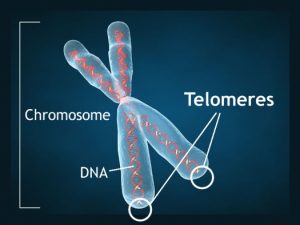 Telomeres are on the end caps of all DNA and the greatest biomarker for aging. They are an indicator of length and quality of life. Some of today’s greatest science shows that the more rapidly a telomere shortens, the faster the aging process occurs.

Elizabeth Blackburn, a 2009 Nobel Prize winner, explained through some of her work that one of the greater reasons for telomere shortening is due to an increased amount of catecholamines (Stress hormones). She was referred to in a book titled “The Immortality Edge” saying, “Along with measuring aging biomarkers, Blackburn also measured the levels of three chronic stress hormones: cortisol, epinephrine, and norepinephrine. The levels of these hormones went up lockstep with the rate of telomere shortening, a decline in telomerase activity, and an increase in oxidation.” (page 102)

The 2011 Ogura study (Journal of Alternative and Therapeutic Medicine) proved a relationship with a Chiropractic adjustment and the inhibition of the sympathetic nervous system. Science has shown that inhibiting the sympathetic nervous system is accompanied with a decrease in stress hormones. According to this science and research, Chiropractic adjustments may positively influence (reduce shortening) telomeres.